King Charles III made his maiden speech to the nation after the Queen’s 70-year reign came to an end on Thursday.

His Majesty paid tribute to his “beloved mother” when he made a “solemn pledge” to serve the country with “loyalty, respect and love”.

Here we take a look at five key takeaways from the historic address.

‘My life will change’

King Charles developed a reputation for outspokenness when he was the Prince of Wales.

He is known for having championed causes such as fighting climate change and advocating for medicines and alternative therapies.

Tears, cheers and a kiss for the king – live updates

As Prince of Wales, he was sometimes accused of meddling in political and social matters that might not concern him, and he felt he should be able to speak freely about matters he thought were important to the country.

However, in his address to the nation, he hinted that he will change his behavior now that he is head of state.

“My life will of course change as I take on my new responsibilities,” he said.

“It will no longer be possible for me to devote so much of my time and energy to the charities and causes I care so much about. But I know this important work will continue in the trusted hands of others.”

King Charles’ change of approach is said to be in line with comments he made in 2018, in which he acknowledged that heir apparent and monarch were his two very different roles.

King Charles also sent his love to his son Prince Harry and his wife Meghan.

The Duke and Duchess of Sussex have lived in California since stepping back senior royals in 2020.

The queen would have been disappointed after Harry and Meghan failed to consult her about their decision.

King Charles said in his speech: “I also want to express my love for Harry and Meghan as they continue to build their lives abroad.”

At one of the key moments of the speech, King Charles said he was “proud” to have on hand his son William his former title of Prince of Wales.

The monarch added that he had been “so immensely privileged to bear so much of my life and duty”.

Meanwhile, William’s wife Catherine is the first person since Diana to use the title Princess of Wales.

The King said: “With Catherine at his side, I know our new Prince and Princess of Wales will continue to inspire and lead our national conversations, helping to bring the marginalized to the center where essential help can be given.”

King Charles also said that William “now takes the Scottish titles that have meant so much to me”.

“He succeeds me as Duke of Cornwall and assumes the responsibilities for the Duchy of Cornwall, which I have assumed for over five decades,” he added.

Tribute to the Queen

The king paid tribute to his “beloved mother” as an “inspiration and example to me and all my family”.

“Queen Elizabeth’s life was a life well lived; a promise with the fulfillment of fate, and she is most mourned at her death,” he said.

The King continued: “In 1947, on her 21st birthday, in a broadcast from Cape Town to the Commonwealth, she pledged to dedicate her life, whether short or long, to the service of her peoples.

“That was more than a promise: it was a deep personal commitment that defined her whole life. She made sacrifices for her duty.”

King Charles also said that his mother’s “devotion and devotion as Sovereign never renounced” and that the “affection, admiration and respect she inspired became the hallmark of her reign”.

He added: “Every member of my family can attest, she combined these qualities with warmth, humor and an unerring ability to always see the best in people.” 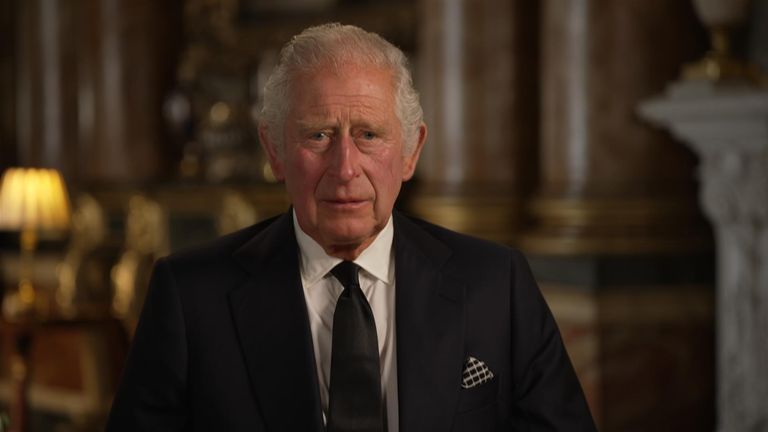 Watch the King’s Speech in full

How he plans to lead

King Charles said his faith is “deeply ingrained” in the Church of England and that he was “raised to nurture a sense of duty towards others”.

“As the Queen herself did with such unwavering devotion, I now also solemnly pledge myself, during the remaining time God bestows upon me, to uphold the constitutional principles at the heart of our nation,” he said.

“And wherever you live in the UK, or in the realms and territories around the world, and whatever your background or beliefs, I will try to serve you with loyalty, respect and love, as I have all my life done. “

Andy Burnham says there is reason to nationalize energy companies: ‘Privatization got us into this mess’ | political news