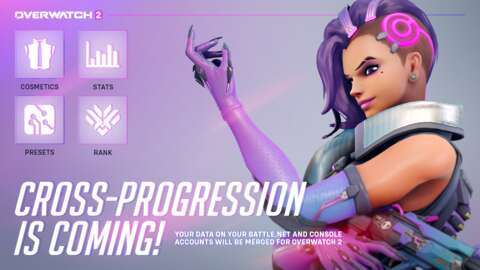 After years of fans yearning for a way to merge their Overwatch profiles across consoles, Blizzard is finally adding cross-progression to the popular first-person hero shooter. With the addition of this feature, players will be able to access all their in-game cosmetics and stats regardless of which platform they are playing on. The merger will officially take effect on October 4 — the same day Overwatch 2 launches — though those who want to take advantage of cross-progression can enable the feature starting today.

Merging your different Overwatch accounts into one comprehensive profile is as easy as logging into one of the systems you play on. After logging in, you should immediately be prompted to identify, select, and confirm the accounts you want to merge. Players can merge a account from any of the following platforms: Xbox, PlayStation, Nintendo Switch, and PC.

Once you have completed these steps, Blizzard will prepare your accounts for synchronization. However, please note that if you do not complete the steps to merge your profiles when prompted by the game, you will lose the ability to do so at a later date. In addition, if you merge a console account, you cannot link to another console account on the same platform.

All players who want to merge their accounts must have a Battle.net account, which in theory you should already have if you’ve played Overwatch before. Once you choose to merge your accounts, all your cosmetics and progress will be saved on different systems with this account, which will then share the content across your system profiles.

After your accounts have been successfully merged, all the in-game cosmetics you’ve collected while playing Overwatch will be waiting for you in your Hero Gallery; This includes all sprays, emotes and skins. If you have duplicate cosmetics, they will be merged into one item.

However, how your competitive position and general metrics are evaluated is not so simple. League and skill ratings are separated by PC and console input pools, with the highest rank taken if players merge multiple console accounts. Credits, League Tokens and total values, such as playing time or number of wins, are combined from different profiles. Recommendations and best values ​​- including hero accuracy and kill streaks – will get the highest value from the merged accounts. All in-game achievements earned on each platform will transfer to your merged account, although console-specific achievements will remain locked on their respective platforms.

For more help merging your accounts, visit Blizzard’s Account Link support article. If you encounter errors while linking your accounts, Blizzard recommends that you read the instructions listed in their support article Account Link Common Problems. And if you’re looking for more information about Overwatch 2 and the changes coming to the base game, here’s everything we know about the upcoming release.